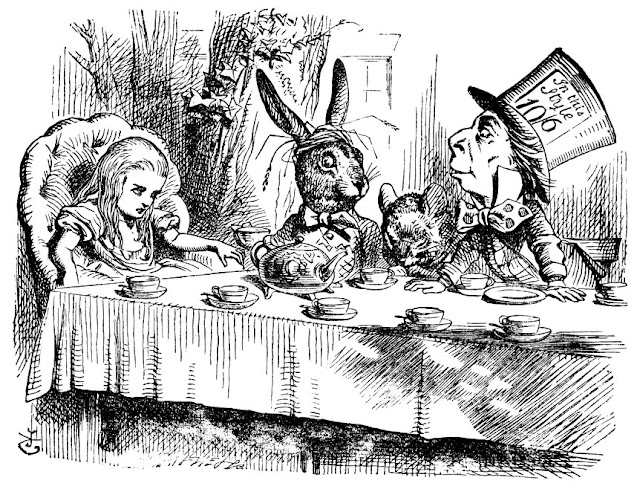 In case you hadn’t noticed, there has been a lot of talk about Alice in Wonderland recently.
This is due to the fact that 2015 marks 150 years since Lewis Carroll’s book about a young girl’s surreal adventures in a magical wonderland were first published.
The book, published on 26 November 1865, was titled Alice’s Adventures in Wonderland but the original title was intended to be Alice's Adventures Underground.
Should I ever decide to write a book about my time here at the London Silver Vaults, I might just pinch that. Sandy’s Adventures Underground has a nice ring to it, I think.

The book has never been out of print and has been translated into nearly 200 languages. You won’t, however, find it in Chinese as it was banned in China in 1931 because they believe animals should not use human language.
Lewis Carroll was, in fact, the pen name of a gentleman born Charles Lutwidge Dodgson on 27 January 1832.
Carroll was a man with many hats and, as well as writing, he was also a respected mathematician, logician, an anglican deacon and a photographer.
He wrote the fantastic tale of Alice while working at Christ Church College in Oxford.
It was there he would meet the Dean of the college, Henry Liddell, and the Dean’s young family, including a girl called Alice.
One summer, while on a boating trip up the Thames, Carroll  began to tell Alice and her two  sisters a magical tale of a young girl and her adventures. With no intention at that stage of producing a book, he eventually wrote these tales down in a dairy, as the children would beg him to recount the story again and again. He was to eventually turn his diary notes into a novel which he presented to Alice Liddell for Christmas in 1864.

He then elaborated the story and added new characters such as the Mad Hatter and the Cheshire Cat and eventually self published this new version in 1865 after being convinced by fellow writer Henry Kingsley to do so.
Many of the characters in the book are loosely based on the people around the college whom the children would have known.  In fact,The Dodo is said to represent Carroll himself. Carroll's real name was Charles Dobson and, as he had as stammer, he would often introduce himself as Do-do-dodgson. Or so the story goes.
After the book's release its popularity grew quickly and this resulted in Carroll writing a sequel, Through the Looking Glass and What Alice Found There, published in 1871.
Alice eventually became the most popular children’s book in England.
On 14th of January 1898, just shy of his 66th birthday, Lewis Carroll died of pneumonia.
He left behind a legacy which will surely delight young and old alike for at least 150 years more.
Should you be looking to throw your very own Mad Hatter’s Tea Party in honour of this occasion,
why not start off by having your own Adventure Underground right here in the London Silver Vaults.
You can “begin at the beginning and go on till you come to the end: then stop.”
Deep underground, you will find a treasure trove of fine silver that is simply out of this world.
Among these corridors you are sure to find many items to make your own Mad Hatter’s Tea Party
truly special.

Posted by I. Franks Antique Silver at Saturday, November 14, 2015