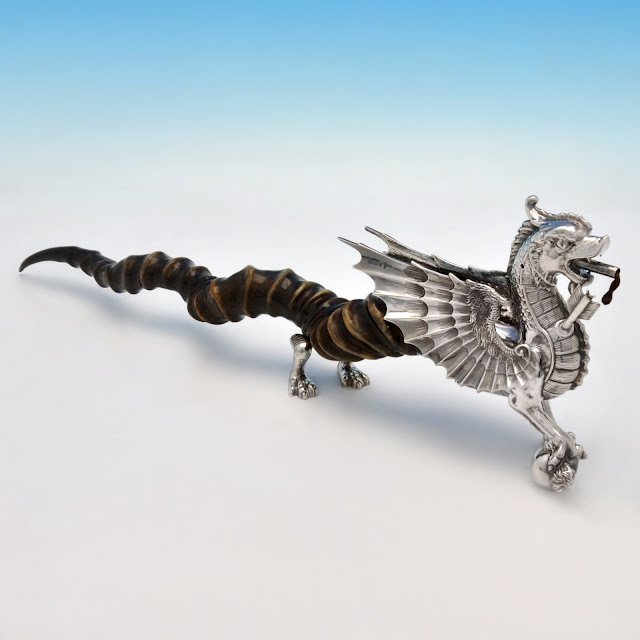 Here in our shop we come across some weird and wonderful things, and, this superb cigar lighter certainly counts as being one of them.
Many people ponder what it is when seeing it for the first time. What at first appears to be simply a bizarre sculptural piece turns out to have a practical use as well.


I’m sure many a fine cigar has been lit using this fire breathing creature.
You can almost picture the scene.
A group of well to do chaps, whiling away the hours in their gentlemen's club. The fire is roaring, the whisky is flowing and there is a cloud of pungent cigar smoke filling the air.
One wouldn’t want to leave the comfort of their leather armchair to pass the cigar lighter!
With all the debating and  deliberating , those cigars would have most likely been snuffed out on a regular basis; it’s hard to huff and to puff simultaneously! Dislodging oneself from one’s seat in order relight your fine Havanan would just be a bore.
A solution is at hand, however, if you possess this handy long handled cigar lighter. At 20” long, one could simply pass it from one to the other, only barely having to lean forward.
Sitting majestically on the table amongst the whisky tumblers and brandy snifters it would certainly make an eye-catching piece.
The striking dragon shape would symbolise the fierceness of the conversations no doubt.
To use it, you would ignite the wick spewing from the dragon’s mouth and simply remove the silver sword from this impaled mythical creature, using the arrow to light the cigar. This method would allow the beast to remain stationary, should one choose, and one could simply use the arrow to light up. 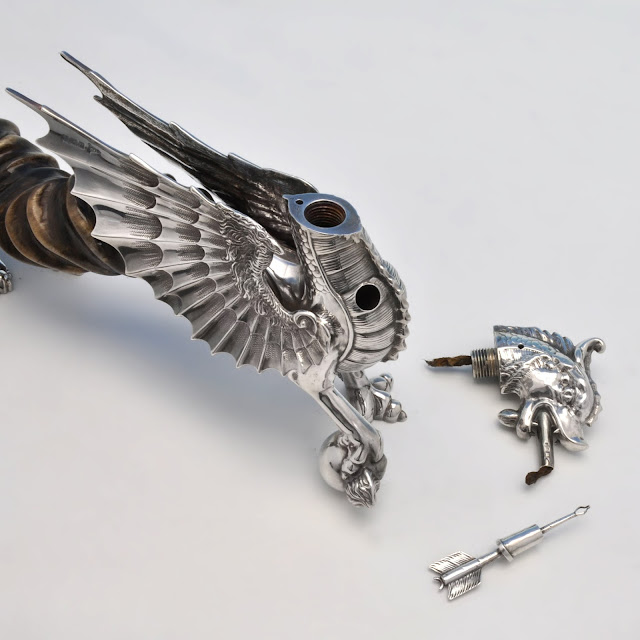 The dragon is made from sterling silver while the handle itself is made from the horn of an impala.
This would most likely have  turned those fireside conversations into bragging and boasting of past hunting conquests.
I wouldn't be at all surprised if the person who slayed the unfortunate impala was, in fact, the person who may of commissioned this fabled beast to be made in the first place.
However this magnificent dragon came to be, it would certainly get the conversation going.
A stunning object which conjures up an era long gone.
Posted by I. Franks Antique Silver at Saturday, July 04, 2015