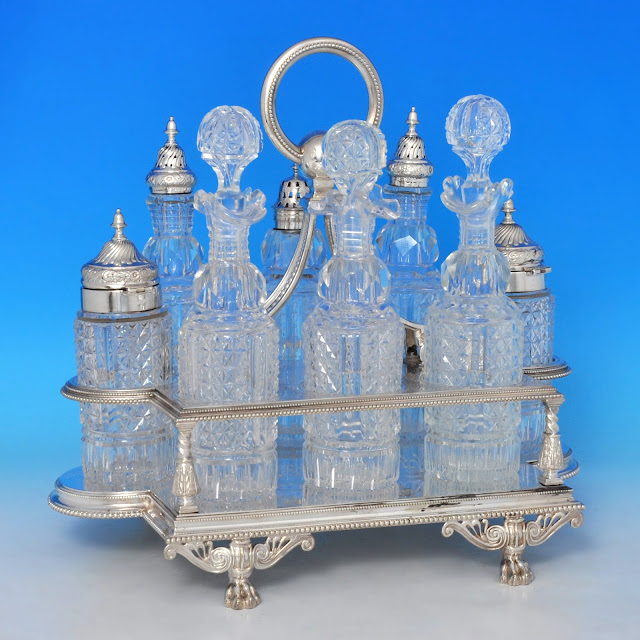 We are probably all familiar with the two bottle cruet set with a bottle each for oil and vinegar. You might also see the addition of a spot for your salt and pepper.
However, if you look around, you may stumble across a set that consists of several different sized bottles.


The word cruet is derived from the Old French ‘crue’ meaning pot.Further back in history, the original cruets would be found in churches to hold water and wine for use in religious ceremonies. Eventually,in the 17th  century, they found their way to the dining table, where you will still find them today.
To keep these bottles contained, one might find them sitting in a handsome frame.
Often these sets would be produced in silver or silver plate with beautifully cut  glass bottles. The glass would enable you to see the contents and the flavours would remain true. I should also imagine that, by candlelight, the reflection cast would create a lovely atmosphere as well.
When cruet sets were introduced they were primarily for just oil and vinegar. Before long there were other bottles added to these frames for salt, pepper and other spices.
As our travels to the east and beyond provided us with more and more exotic spices the amount of bottles found on these frames increased. It is not uncommon to find these frames with holders for five, six or  even more, different condiments. 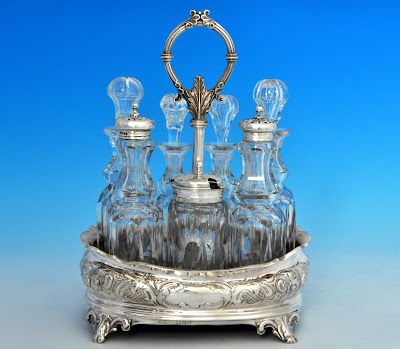 You could expect to find on these silver frames those pretty glass bottles with cut glass stoppers or pierced silver lids for shaking spice over your food. The spices you might have expected to find would include pepper,oil,vinegar,dried mustard and  more avant garde flavourings such as cayenne pepper and soy sauce. There were no set rules as to what condiments you might wish to present at your table. Often you would find silver labels to inform you what was contained in each of these bottles. Not dissimilar to wine labels, these labels would be left blank so you could engrave the name of which ever spice you wished.
The design of the frame was typically footed and often elaborately decorated, making them an eye-catching piece for the table. The frame would usually have a handle making them easier to transport from the kitchen or, indeed, pass around the table.
The lovely thing about these alluring silver cruet sets is that they are as functional and useful today as they ever were. A handsome addition to the table but just as attractive as an object to sit on your sideboard display. Who could resist?
Posted by I. Franks Antique Silver at Saturday, July 11, 2015